Switch to ENG
It’s time to catch up on the trending Entertainment Newsmakers of the day. It has been a long long day. Andrila Sharma, a popular Bengali actress passed away on Sunday. Ajay Devgn, Tabu starrer Drishyam 2 continues to win hearts. Kangana Ranaut is all praise for Tabu. Vicky Kaushal, Kiara Advani and Bhumi Pednekar starrer Govinda Naam Mera trailer gets a shout-out from Sidharth Malhotra. BTS Jungkook performed at the FIFA World Cup 2022. And a lot more happened in the world of entertainment, let’s catch up.
Ajay Devgn, Tabu, Akshaye Khanna and other celebs starrer thriller movie, Drishyam 2 took a flying start at the box office by minting Rs 15.38 crore on day 1. And Drishyam 2 day 2 box office collection has seen a jump. Saturday collections of Drishyam 2 are Rs 21.59 crores. Which makes the two-day total for Drishyam 2 to be Rs 36.97 crore. It is expected that on Sunday, the film should pick up business even more. 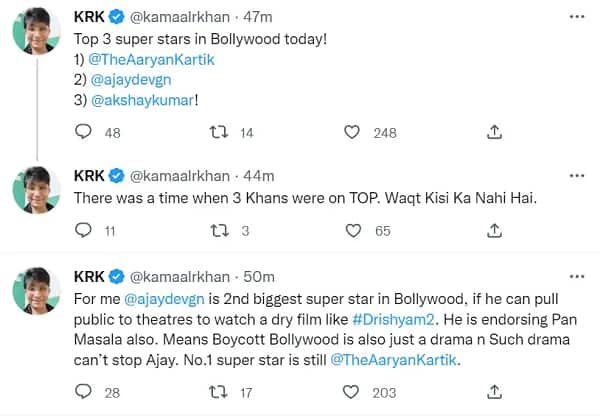 Krishna Vrinda Vihari actor Naga Shaurya and Anusha Shetty. She is a Bengaluru-based interior designer. The couple got married in JW Marriot at 11 AM, state reports. Videos from their traditional wedding ceremony went viral in no time. They look so happy, check out the video below:
A post shared by Kamlesh Nand (work) (@artistrybuzz_)
Kangana Ranaut took to her social media handle and praised Tabu for winning hearts with Drishyam 2 and Bhool Bhulaiyaa 2 this year. Both the films have been deemed blockbusters at the box office and they both starred Tabu in key roles. Kangana hailed Tabu saying that she is single-handedly saving the Hindi film industry. Read more deets here.
The trailer of Vicky Kaushal, Bhumi Pednekar and Kiara Advani starrer Govinda Naam Mera dropped online recently. Vicky plays Govinda to Bhumi’s Gauri and Kiara’s Suku. Vicky is married to Bhumi and is having an affair with Kiara in the film. They get embroiled in a murder mystery soon which has a comedy touch to it. Sidharth Malhotra who is said to be dating Kiara Advani gave a shout-out to the film’s trailer. Check Sid’s story here: 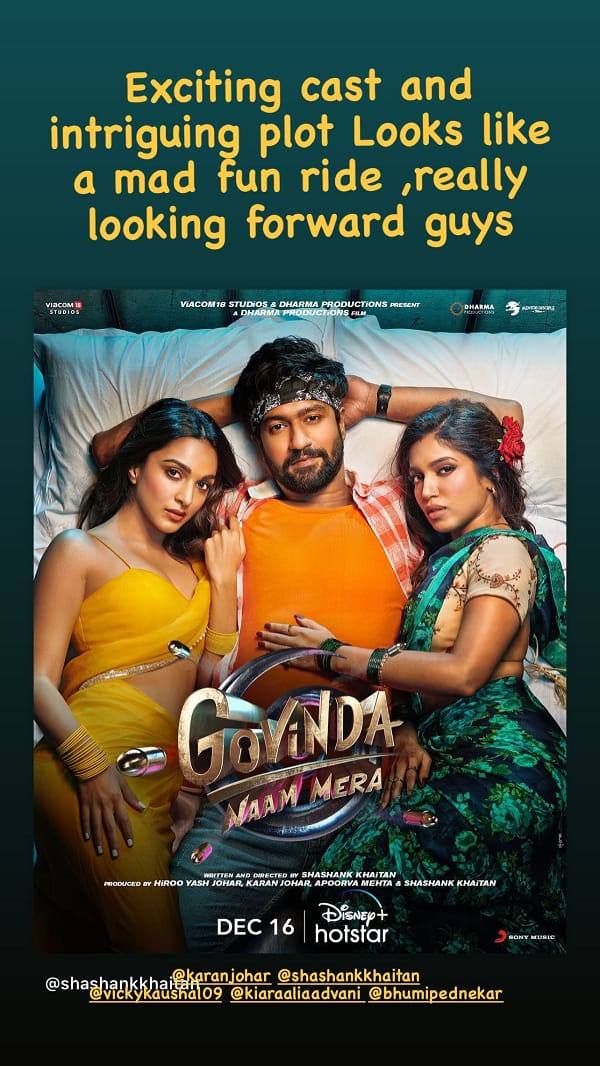 BTS member Jungkook performed at the opening ceremony of the FIFA World Cup 2022 in Qatar. He performed in Dreamers alongside Fahad Al Kubaisi. The videos and clips of Jungkook’s performance were shared online. Even the rest of the Bangtan Boys, RM, Jimin, Suga, J-Hope and Taehyung watched JK perform. Check out the whole story here.
That’s all in the Entertainment News today.
Copyright © 2023 Indiadotcom Digital Private Limited. All rights reserved.